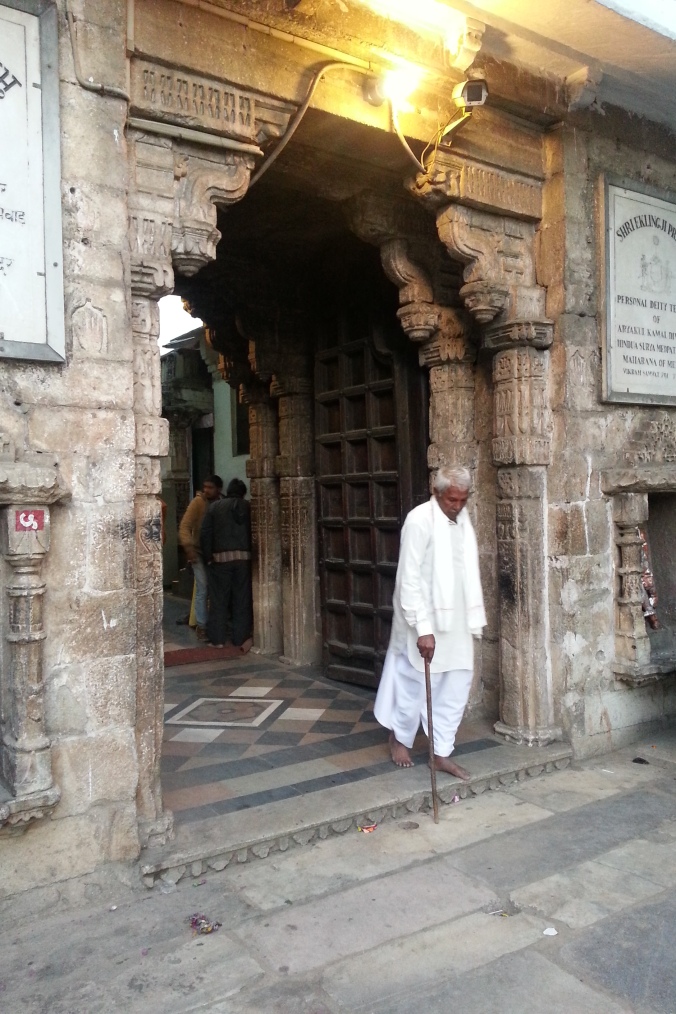 Where faith take a troll on age, a person coming out from Ekling ji temple.

A Face in the Crowd

Eklingji is a Hindu temple complex in Udaipur District of Rajasthan in western India. Eklingji is believed to be the ruling deity of Mewar Princely State and the Ruler Maharana rules as his Dewan.

Begun in 971, the temple complex was built by the Guhila (later called Sesodia) dynasty of Mewar, in honor of their presiding deity Eklingji, a form of Lord Shiva. The beautifully sculpted temple complex includes 108 temples within its high walls. The main temple, which dates to the 15th century, was rebuilt from the ruins of an earlier destroyed temple. The walled complex is made of marble and granite and has an enormous double-storied, elaborately pillared hall or “mandap” under a vast pyramidal roof, with a four-faced image of Lord Shiva in black marble. Another temple in the complex is the Lakulish Temple; built in 971, it is the only temple of the Lakulish sect in the whole of India.

Located 22 km north of Udaipur, Eklingji is conveniently reached by bus and car. Tourists can access to the complex from RSTC buses that runs from Udaipur to Eklingji and other major destinations of Rajasthan. It takes approximately an hour (60 Minutes) to reach Eklingji from Udaipur. The Eklingji temple is surrounded by long walls of hard rock. This fascinating temple was built in 734 A.D. It consists of 108 temples chiseled out of sandstone and marble. The Maharana of Udaipur pays a private visit to the temple on Monday evening.

One thought on “A face in a crowd”

This site uses Akismet to reduce spam. Learn how your comment data is processed.